A Week in the Life of Corinth
Ben Witherington III 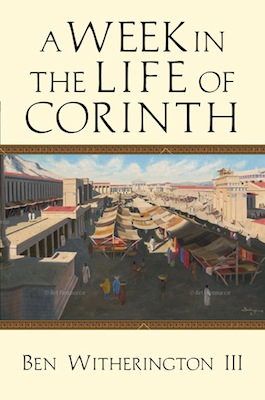 Intrigue is in the air as Nicanor returns to Corinth and reports to his patron Erastos on recent business dealings in Rome. Nicanor, a former slave, is a man on the make. But surprises keep springing up in his path. A political rival of Erastos is laying a plot, and a new religion from the east keeps pressing in on his life.

Spend an imaginary week in Paul's Corinth as the story of Nicanor winds through street and forum, marketplace and baths, taking us into shop, villa and apartment, where we meet friends new and old. From our observing a dinner in the temple of Aesclepius to Christian worship in the home of Erastos, Paul's dealings with the Corinthians in his letters take on focused relevance and social clarity. Explanatory sidebars crack open windows on features we encounter along the way, offering further background.

For gaining a sense of the social and cultural context of Paul's urban churches, A Week in the Life of Corinth is an engaging and entertaining alternative to traditional texts. This is a book that will be enjoyed by students as well as by readers with a general interest in the world of the New Testament.