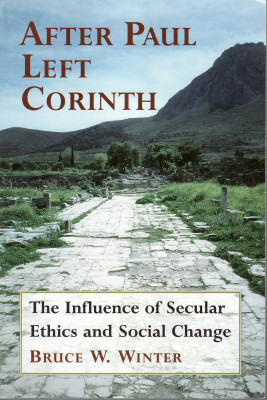 After Paul Left Corinth gathers for the first time all the relevant extant material from literary, nonliterary, and archaeological sources on what life was like in the first-century Roman colony of Corinth. Using this evidence, Bruce Winter not only opens a fascinating vista on day-to-day living in the Graeco-Roman world but, more importantly, helps us understand what happened to the Christian community after Paul left Corinth. As Winter shows, the origin of many of the problems Paul dealt with in 1 Corinthians can be traced to culturally determined responses to aspects of life in Corinth.

The significance of the role that culture played in the life of the Corinthian Christians has either been ignored or underestimated in explaining the reasons for their difficulties after Paul left. Winter first examines the extent to which Paul communicated alternative ways of behaving while he was in Corinth. Winter then explores the social changes that occurred in Corinth after Paul left. Severe grain shortages, the relocation of the Isthmian Games, the introduction of a new federal imperial cult, the withdrawal of kosher meat from the official market – all of these cultural events had a substantial impact on the life of the emerging Christian community.